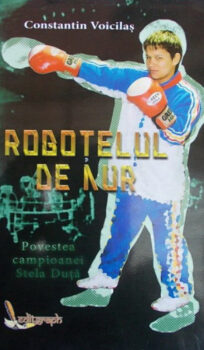 “When one makes a film, magic is born”, Radu Mocanu.

“We made this film because of the story we wanted to tell”, Mihai Dragolea (Aarc.ro).

Discover the magic of the documentary The Golden Robot, shown at One World Romania in 2016, Kinedok section. Meet Steluța Duță and find out her special story: she lived in state care, then she was thrown on the streets, she lived a life of violence and abuse until she discovered the sport that changed her life: boxing.

Steluta Duta aka The Golden Robot, a 32-year old female boxer, has won the European and World Cups many times over. Abandoned at birth, she lived a life of violence and abuse in state care during the Ceausescu regime, just to be thrown on the streets at 16, after being labelled a ‘problem child’. Steluta’s life changed when she started boxing at the age of 20, after being discovered by her coach and adoptive father, Mr. Voicilasi.

While practicing for the 2014 European Boxing Championship, Steluta takes a trip down memory lane and visits her past life. Meeting her family for the first time, seeing old forgotten friends from the orphanage, Steluta embarks on a voyage of reliving her past, while undergoing a brutal training in view of the championships.

As media try to exploit her heart-breaking story in the eve of the championships, pressure amounts from all sides. Steluta tries to cope and feels determined to win the games in order to fulfil her dream of owning a house. Will she win the Championships?

Subscribe to our Substack Newsletter system to receive the latest news about romaniam cinema.

Mother, father, I have to tell you something